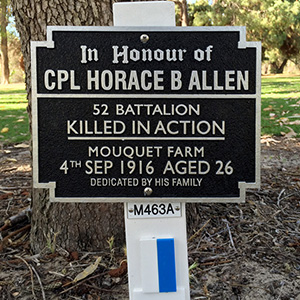 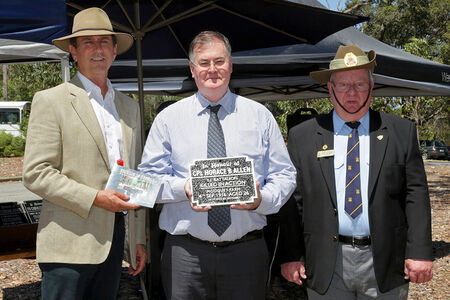 Corporal Horace Beresford Allen was one of three sons and two daughters, born to Alfred and Alice Allen of Subiaco, Western Australia.

Horace was born at Traralgon in Victoria. His sporting activities covered gymnastics and cross country running as a member of the YMCA. His employment appears to have been as a clerk.

Following initial training, he embarked on HMAT Benalla at Fremantle as part of 9 to 12 Reinforcement group of 12 Battalion on 1 November 1915.

Following further training with 3 Training Battalion in the Middle East, he joined 52 Battalion at Tel el Kebir on 3 March 1916 and was promoted to corporal on 20 May 1916.

He was reported as missing in action on 4 September 1916. Later, this report was changed to killed in action from that date.

He was 26 years of age and his name is recorded on the Villers-Bretonneux Memorial, Picardie, France.

His plaque is placed alongside those of known relatives, Lieutenant Bartholomew Stubbs of 51 Battalion and Corporal James Jones of 11 Division Signals Company.