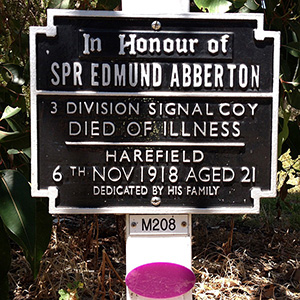 Sapper Edmund Abberton of 3 Division Signal Company was born in Manchester England in 1898, one of seven boys and a girl born to Michael and Martha Abberton.

He attended school at Gorton England before the family migrated to Western Australia in 1912 when he was 14.

They lived in Railway Terrace, Guildford. Prior to his enlistment he worked as a telegraph operator at Perth GPO.

In December 1915, when he was 17, he put up his age so as to join four of his brothers who were already serving in the army.

Due to his training as a telegraph operator he was posted to the Signal School in Victoria.

In May 1916, he embarked on HMAT Ascanius in Melbourne, bound for Southampton.

In November 1916 he proceeded to France and was engaged in the fighting in the Albert area.

Sapper Edmund Abberton, service number 10831 of 3 Division Signal Company, died of pneumonia on 6 November 1918 at Harefield Hospital England after contracting influenza. He was 21 years of age.