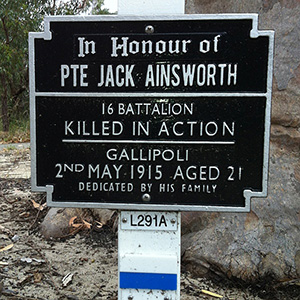 Private Jack Ainsworth was born to Edwin and Francis Megerney. Jack's father died when he was one year old, and his mother remarried to William Ainsworth who was a widower.

Altogether there were nine boys and seven girls in the family and they resided at Graham Street, Port Melbourne. Jack attended Graham Street primary school.

The family came to Perth in 1905 and lived in the Maylands area until 1911 when they took up land at Ajana, north of Northampton.

Jack worked as a teamster before enlisting at Blackboy Hill Military Camp in November 1914.

In February 1915, after finishing training, he sailed from Fremantle aboard HMAT Itonus bound for Gallipoli via Egypt arriving there in April.

Private Jack Ainsworth, service number 1451 of 16 Battalion was killed in action at Gallipoli on 2 May 1915. He was twenty-one years of age.

His plaque is located alongside that of his step brother, Private Herbert James Ainsworth of 28 Battalion.