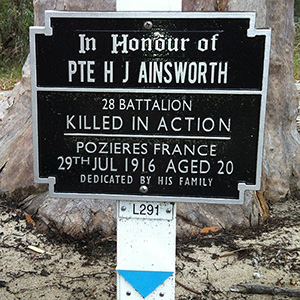 Private Herbert James Ainsworth was born to William and Jemima Ainsworth. After the death of his mother, his father remarried the widow Francis Megerney.

Altogether there were nine boys and seven girls in the family and they resided at Graham Street, Port Melbourne. Herbert attended Graham Street primary school.

The family came to Perth in 1905 and lived in the Maylands area until 1911 when they took up land at Ajana, north of Northampton.

Herbert enlisted at Kalgoorlie at the end of February 1915 and prior to that he had worked as a farm hand.

In March, he commenced training at Blackboy Hill Military Camp and in June embarked on HMAT Ascanius for Egypt.

Then in September he embarked on HT Ivernia at Alexandria for Gallipoli.

In November he was admitted to hospital at Heliopolis with jaundice and he returned to duty at Tel el Kebir in January 1916.

He then sailed from Alexandria in March for Marseilles.

Private Herbert James Ainsworth, service number 1 of 28 Battalion was killed in action at Pozieres on 29 July 1916. He was 20 years of age.

His plaque is located alongside that of his step brother, Private Jack Ainsworth of 16 Battalion.