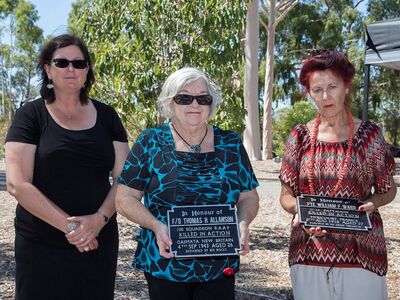 Flying Officer Thomas Hessey Allanson was the only son of Frank and Grace Allanson. He was born at Albany in July 1917 and he had one sister.

His father, Frank, was a policeman and was posted to various locations throughout the state.

Thomas attended school at Maylands and was studying accountancy prior to his enlistment.

He married his wife Dorothy in April 1941 and they resided in Emmerson Street, North Perth.

Thomas enlisted in July and did his initial training at Pearce before continuing his training in the Eastern States.

He became a flying instructor and, in his letters to family, expressed frustration at not being posted to an operational squadron.

Finally, he was posted to 100 Squadron which was the first Australian squadron to be equipped with Australian built Beaufort bombers.

100 Squadron was initially based at Mareeba in Queensland, then at Port Moresby and, later at Milne Bay, attacking enemy shipping and ground targets.

While on a bombing mission against Gasmata airfield, the aircraft was struck by anti-aircraft fire and crashed. It was not until after the war in 1946 that the plane was found and identified.

Flying Officer Thomas Hessey Allanson, service number 415106 of 100 Squadron RAAF, was killed in action near Gasmata on 4 September 1943. He was 26 years of age.

His plaque is placed alongside that of a known relative through marriage, Private William Ward of 16 Battalion.