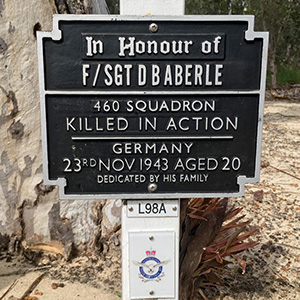 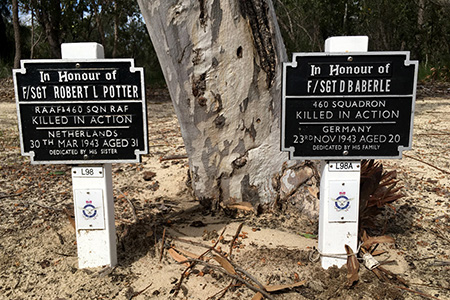 Flight Sergeant Douglas Buchanan Aberle of 460 Squadron was born in East Fremantle in August 1923, the eldest son of Ernest and Vera Aberle. He had two brothers and a sister.

He grew up in the depression years but with his family and friends enjoyed a big back yard and the Swan River for fishing, crabbing and swimming.

Doug attended Richmond Primary and later Fremantle Boys' High where he gained his Junior Certificate in 1939.

He began work with the Shell Company as a junior clerk in its Perth office.

As teenagers Doug, his brother and friends joined the Volunteer Defence Corps where they received weekend training in drills and small arms.

In January 1942 he joined the Australian army and then transferred to the RAAF in August of that year.

Doug did his basic training at Clontarf and later in West Sale Victoria in air gunnery and wireless telegraphy schools.

In May 1943 he departed by sea for the United Kingdom via the United States. He was posted to 460 Squadron as an air gunner.

He flew in Lancaster ED644 which was one of 26 that took off from Binbrook, with a full bomb load heading for Berlin, on 23 November 1943.