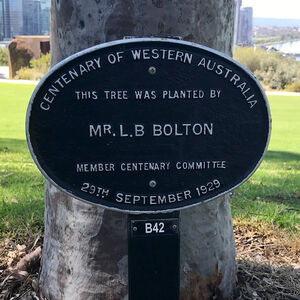 He came with his family to Western Australia in 1887, completing his education in Fremantle.

In 1898, he was apprenticed to his father's coach building business, where he assisted in converting the factory to the construction of motor bodies. He eventually became the managing director.

For 16 years, Mr Bolton was a member of the East Fremantle Municipal Council and was also Mayor for five years.

In 1930 he was elected to the Legislative Council as the member for the Metropolitan Province.

He had also been the President of the Chamber of Manufacturers (1926-1931), Vice President and an executive of the Employers' Federation.

He was Chairman of the Fremantle Hospital Board for eight years during and after WWI and a member of this Board for 11 years.

Mr Bolton was a sportsman of note, representing the State in cycling, selected for State in the first interstate Lacrosse carnival in Adelaide in 1905.

He also played first class cricket. In 1912, he was in the semi-finals for the interstate bowling carnival.

Mr Leonard Bolton MLC, was a member of the Western Australian Centenary Committee (Manufactures and commerce group) in 1929.