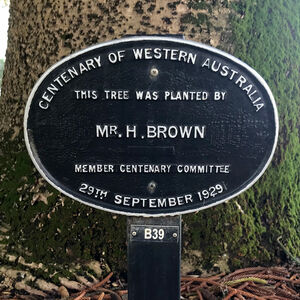 He arrived in Western Australia in the late 1880's from South Africa after purchasing discharge from where he was Captain of Cape Mounted Rifles (1883-87).

He worked for the legal firm of Stone, Burt and Coy, before becoming manager of the long established Perth Building Society from 1892 to 1918, where he was suspended following allegations of financial impropriety.

He was a Justice of the Peace, deputy chairman of Perth Hospital Board and Managing Trustee of the WA cricket ground.

Mr Harry Brown was a member of the Western Australian Centenary Committee and his plaque must have been dedicated posthumously.