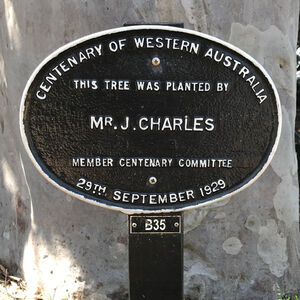 He was known as an enterprising land agent and made money by developing land for housing in Subiaco and South Perth.

He also started a ferry service between Perth and South Perth in 1897.

In 1898 he launched the lucrative WA Tattersalls in 1898 with a 'consultation' of 5 shillings on the Perth Cup, which netted him 12000 subscribers. For the 1900 Melbourne Cup, his 5 shillings subscribers numbered 100000.

He had just installed an 'electrical apparatus' to ensure speedy drawing and perfect fairness, when the Government of George Leake closed his operation down.

Later, Charles was elected to Perth City Council in 1900 and became the first Mayor of South Perth in 1902.

Mr Joseph Charles was a member of the Western Australian Centenary Committee (Publicity group) in 1929.