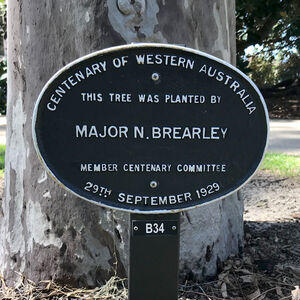 He trained as an engineer in Perth, went to England at the outbreak of WWI and became a pilot with the Royal Flying Corps.

He won the Distinguished Service Order and Military Cross for gallantry in action over France and after being wounded in action returned to Perth.

He then decided to bring airplanes to Western Australia to be used as a commercial operation and began by shipping two ex-military Avro 504 bi-planes to Fremantle.

In August 1919, he gave his first flying exhibition in Perth from the WA Cricket Ground, the first time planes had flown in Western Australia.

On 4 December 1921 three Bristol bi-planes, piloted by Normal Brearley, Len Taplin and Robert Fawcett, took off from the Swan River foreshore in Perth and flew to Geraldton to inaugurate the service. Next day the planes left for Carnarvon but 160km from Geraldton, Fawcett's plane crashed killing both pilot and mechanic.

In 1924, Brearley moved his planes from the unofficial foreshore site to the new Maylands aerodrome and WA Airways Ltd. made aviation history as the first regular airline in the Commonwealth of Australia.

Brearley also helped to establish QANTAS by giving advice and organisational details when this airline was the second to the awarded a contract by the Federal Government in 1922.

The approach road to Perth International Airport was named Brearley Avenue by the Commonwealth Government in honour of the pioneer aviator and a memorial to him can be seen in the airport terminal.

Major Norman Brearley was a member of the Western Australian Centenary Committee (Aerial group) in 1929.