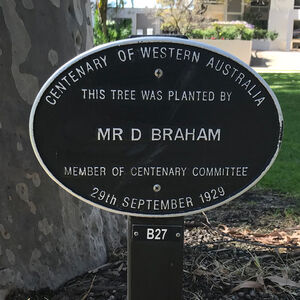 He joined 'The Times' newspaper where he became foreign editor after spending time reporting from Berlin, Constantinople and St. Petersburg where he was evicted for his journalistic reports.

This work in Europe convinced him that it was impossible to run a country without free speech and a free press.

He came to Australia in May 1914 to become editor for Sydney's 'Daily Telegraph'. In 1922 he came editor of another Sydney newspaper 'The Forum', which aimed to be like the 'Spectator' or 'The Economist'.

During his 6 years in WA, he became involved with the WA Rowing Association where he helped raise money to send teams for the Kings Cup competitions and also money for the UWA boat shed.

He was President of the WA Classical Association, aimed at encouraging classical music performances.

Mr D.D. Braham was a member of the Western Australian Centenary Committee in 1929.