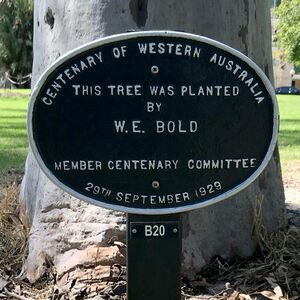 He returned to London and worked as a clerk with an Australian mercantile firm before migrating to Western Australia in 1896.

He worked closely with T.G. Molloy and R.P. Vincent who between them held the mayoral office from 1908-1912.

On a study tour of Britain and the United States in 1914, Bold gathered ideas about town planning and city administration which he incorporated into the 1915 'City Improvement Plan'.

In 1917, he was instrumental in the Council purchasing Perry's 'limekiln estate' which connected the city with its existing endowment lands extending westwards to the coast and with the help of Harold Boas, architect/town planner, and CH Klem, surveyor, he helped plan the suburbs of Floreat Park and City Beach.

In 1936 the Council set aside about 1000 acres for a park for 'the people of Perth' between Floreat and City Beach Estate but it was not until 1998 that the park was launched officially and named Bold Park in his honour. His name is also incorporated into Reabold Hill along with Mr Frank Rea, a mayor of Perth.

Mr William Bold was a member of the Western Australian Centenary Committee (Historical, arts and science and pageantry group) in 1929.