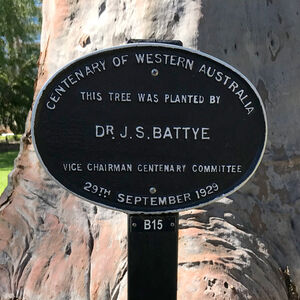 In 1894 he began his sixty-year term as Principal Librarian of the Public Library of Western Australia. He increased the library's holdings and collected not only reference books, newspapers and periodicals but also documentary material on Western Australian history.

It is due to Dr Battye's efforts that the archives of the State have been preserved and catalogued. He was the author of several historical works on Western Australian history and in 1912-13 compiled and published the massive two volume Cyclopaedia of Western Australia.

University of WA conferred on his Doctorate of Literature in 1922, after he had published History of Western Australia. The thesis was initially rejected by Melbourne University on the grounds that it 'lacked depth' but was successfully revised and resubmitted.

He was also prominent in the Masonic Order and received the C.B.E. in 1950. The State Perth Library (Battye Library) is named in his honour.

Mr EW Gillett, Chancellor UWA 1954 was quoted as saying: "He was a clear thinker, fluent speaker and a keen debater."