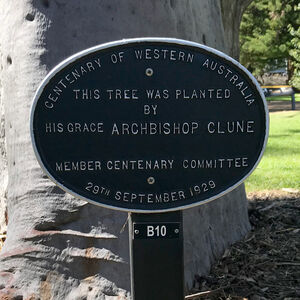 In 1879, he entered Catholic Missionary College at All Hallows, Dublin and was ordained in 1886.

His first appointment was St. Patrick's College, Goulburn New South Wales, where he taught English and was later administrator of Goulburn Cathedral.

In 1893, he returned to England to train as a Redemptorist Missionary. In 1898, he came to Perth with the first band of Redemptorists for Bishop Matthew Gibney.

He later went to New Zealand as Superior of the Redemptorist Monastery, Wellington.

He returned to Perth in 1909 and was consecrated as bishop in 1911, replacing Bishop Gibney.

Dr Clune was responsible for clearing the heavy debt incurred by the previous Bishop of Perth.

In 1913, Perth was elevated to an archbishopric and Dr Clune became the first encumbent.

During World War 1, he was senior chaplain to catholic members of the Australian Imperial Force (AIF) and returned to Perth in 1917.

On a visit to Ireland in 1920, Clune was said to be shocked by the Black and Tan activities against the Sinn Fein, apparently on behalf of the British Government. He acted as a peace negotiator between the conflicting sides. This aroused interest in Europe and the USA. On returning to Perth, he spoke frankly about what he'd seen.

From 1921 to 1931, Archbishop Clune instigated a building program, 56 new buildings such as a foundling home, aged care home and school for mentally handicapped. He also founded the Newman Society of WA in 1925 for catholic university students.

Archbishop Clune was a member of the Western Australian Centenary Committee (Education, Ecclesiastical and Social group) in 1929.