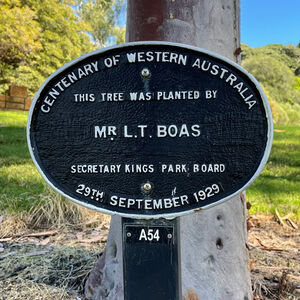 He was Secretary of the Karrakatta Cemetery Board in 1903 and under his advocacy it became one of the most beautiful burial grounds in Australia.

With JJ Simons, Mr Boas in 1905 was a founder of the Young Australia League and was its President for over 40 years.

He was a member of Subiaco Municipal Council and was Mayor for several terms.

He was prominent on behalf of ex-servicemen and in civil defence during WWI and due to this he was one of a few civilian members of the RSL.

Mr Boas was Secretary, Kings Park Board in 1929 during the Western Australia Centenary celebrations.