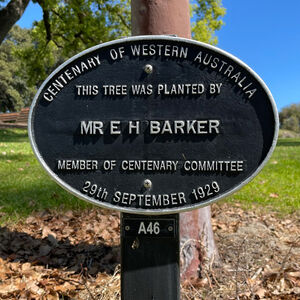 Ernest Herbert Barker (1871 - 20/08/1941) was born in Norfolk, England. Apprenticed in a trade in England he did Economics and Trade Union principles at Ruskin College.

He arrived in Western Australia in 1898. In 1908, he worked in the Government railway workshop, where he became Secretary of Amalgamated Engineering Union (AEU).

From 1913 he was a full time organiser for AEU until 1924 when he became General Secretary. He worked for a 44 hour working week. He also put the Trade Union case before the Arbitration Court for the annual adjustment of the basic wage.

Mr Barker was a member of the Licensing Branch, Trustee of Public Library and Museum, Member of the Faculty of Engineering and Adult Education Boards of the University of WA, also a Trustee of Endowment funds of the Education Department.

His obituary in the West Australian newspaper read: "His services were a monument which would inspire the great body of workers whose condition in life had been immeasurably improved through his advocacy of their industrial claims".

Mr Barker was a member of the Western Australian Centenary Committee (Manufactures and commerce group) in 1929.