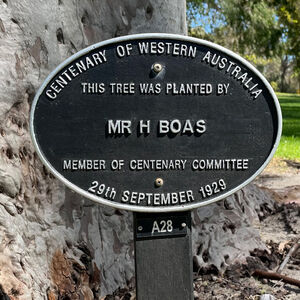 Harold Boas (27/9/1883 - 17/9/1980), younger brother to Lionel Boas was born in Adelaide and was educated at Prince Alfred College. He was indentured to an architect 1899-1902 and became a member of the South Australian Institute of Architects.

When he came to Western Australia in 1905, he transferred his Institute membership to this State. After working with several different architects he joined Oldham, Boas, Ednie-Brown and partners.

During WWI, although Jewish, he was involved in YMC dealings with the Australian Imperial Force (AIF), sending cards to soldiers and their families and, whilst in London, visiting wounded in hospital and arranging gifts and loans.

He was president of WA branch of the United Nations Association and represented Australia and the Council of Australian Jewry at the UN Conference in Bangkok in 1950.

Harold Boas was founder and life member of the Temple of David. He was awarded OBE for his service to town planning and the Jewish Community in Perth. Harold Boas Gardens in West Perth are named for him.

Mr Harold Boas was a member of the Western Australian Centenary Committee (Recreation and amusements group) in 1929.