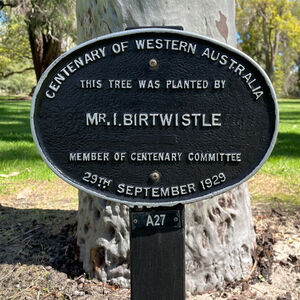 Ivor Treharne Birtwistle (8/4/1892 - 15/6/1976) was born in Beaumaris, Victoria. He was educated at Claremont State School. He was a journalist, historian and tireless youth worker.

Mr Birtwistle started with the West Australian in 1908 as a file room boy. He left briefly to become a Presbyterian minister, returning after a year.

He joined the Australian Imperial Forces (AIF) and saw service at Gallipoli. Later he was to be president of the Gallipoli legion of ANZACS.

He returned to the newspaper in 1920 and became editor of the Western Mail.

Later he was seconded in WWII to the Department of Information, returning to the paper in 1941 and retired in 1957.

Mr Birtwistle was a life member of the YMCA which he had joined in 1912.

He was a member of the State Executive of the Boy Scouts, and an active member of Legacy and worked for the Surf Life Saving Association. For this work he received an OBE in 1952.

Mr Birtwistle was a co-founder of the WA Historical Society in 1927 and its chairman for 23 years.

Mr Ivor Birtwistle was a member of the Western Australian Centenary Committee (Historical, arts and science and pageantry group) in 1929.