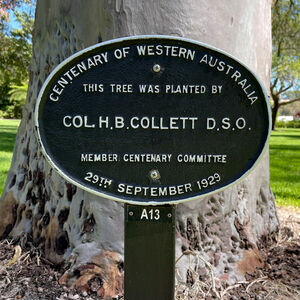 He worked at the public library and was appointed sub-librarian in 1897. He was Assistant General Secretary of the Public Library, Museum and Art Gallery between 1915-1933.

He had a distinguished military career - he joined the WA Voluntary Force (Metropolitan Rifle Volunteers) in 1894 and was commissioned as Lieutenant Colonel in 1908.

He raised, organised and trained the 28 Battalion AIF in 1915 for service at Gallipoli (led them into evacuation), Egypt and France.

He was Minister for Repatriation, Minister in charge of War Service Homes and for C.S.I.R. He was defeated at elections in 1946 and died in 1947.

Colonel Collett was a member of the Executive and Country Organisation groups of the Western Australian Centenary Committee in 1929.