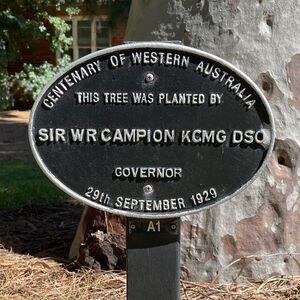 He became a member of the London Stock exchange at a time of Western Australia's mining boom in the 1890s.

As a Liberal Unionist, he entered Parliament in 1910 and held seat until 1924. He was a strong advocate of economic and defence co-operation with British Empire members.

During WWI he served as a colonel and was wounded at Gallipoli, evacuated in 1915. He returned in 1916 to serve in France being awarded the DSO.

Post war he was back with the Royal Sussex Regiment for service with the Army of Occupation in Germany.

In June 1924, Sir William Campion was appointed Governor of Western Australia. He served this post until 1931.

He worked well with both Labour and Nationalist Premiers at a time without major political crises. While here, Sir Campion and his wife travelled widely in Australia.

He was particularly active in the Toc H society (Toc H members seek to ease the burden of others through active service).

On his return to England, he spoke frequently in favour of organised migration to Australia, particularly in support of the Fairbridge Farm and other schemes for young people.

Sir Campion was the Governor in 1929 during the Western Australia Centenary celebrations.