May Drive, Kings Park at dawn. Photo: I. McLean 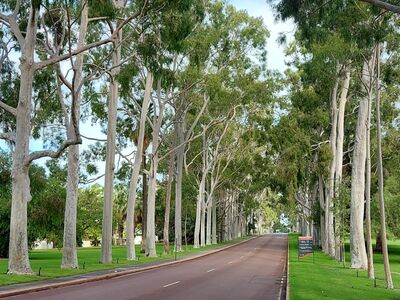 Fraser Avenue, Kings Park. Photo: J. Mansell-FletcherFraser Avenue is lined with a series of plaques dedicated to the 1929 Centennial Committee, Kings Park Board and other dignitaries of the time.

The Honour Avenues Group have maintained the Centenary plaques since 2003. They are readily identifiable and distinguished from other plaques in Kings Park by their oval shape (as opposed to the rectangular shape of the honour avenue plaques).

On Sunday, 29 September 1929, one hundred scarlet-flowering gums (Corymbia ficifolia) were planted by members of the Centenary Committee, Kings Park Board and other dignitaries of the day. Each member was presented by Mr Lovekin with an inscribed silver trowel mounted on a jam wood handle.

'Mr Lovekin then sketched the history of Kings Park and referred to the invaluable work of Lord Forrest, Sir Winthrop Hackett and Colonel Phillips, who were members of the first committee controlling the park. He referred to the difficulties of the board in finding sufficient funds to improve the park, and concluded by saying that the members of the board hoped that the public would recognise the park was their own personal property, and would cherish it accordingly. That might be the last occasion on which he would take part in any public ceremony, as chairman of the board, he said, because a time came when one had to make way for others. He had tried to leave the park better than he had found it, and he hoped his successors would do still better.' (The West Australian, 30 September 1929, p14).

The southern end of Fraser Avenue was re-routed in 1932 to allow for a large concourse in front of the State War Memorial cenotaph. In 1938, it was replanted with a row of lemon-scented gums (Corymbia citriodora) because most of the red-flowering gums had succumbed to canker. The majestic arching upper branches of the lemon-scented gums have grown to provide one of the most beautiful and easily recognised avenues of trees in Western Australia.

The Committee were responsible for arranging Centenary celebrations for Western Australia that year and included things such as a centennial ball, a procession through Perth, a re-enactment pageant through Fremantle, fireworks and aerial displays, the creation of a National Park (now John Forrest National Park), a centenary stamp and the provision of over 70,000 commemorative bronze medals, struck at the Perth Mint, to Western Australian school children.

While 100 trees were planted, there are 101 plaques. Details of each plaque are provided in the the WA Centenary Plaque Database. There is an interesting discrepancy regarding plaque FB27 where Mr D. Braham was listed on the official program as the recipient while Mr H. Greig was listed in The West Australian in that place. At present time, a plaque for Mr Braham is located at FB27, while Mr Greig's plaque is at FB47.

There are 36 additional known members of the Western Australian Centenary Committee that did not have plaques or plant trees at the time but are acknowledged here: